To His Coy Mistress 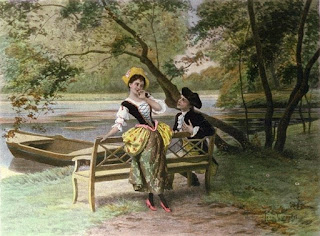 "To His Coy Mistress" is a metaphysical poem written by Andrew Marvell. In this poem the speaker addressed his beloved to make love.

To His Coy Mistress has a clear message of 'seizing the day’ or carpe diem as it is known in Latin, and this is represented in the poems structure as well as its language. The poem is split into three stanzas; the first is mostly an admiration of female beauty with the conceit of his “vegetable love” growing “vaster than empires”, which could be interpreted as phallic imagery representing sexual desire. The second stanza sees a distinct change in tone because “time’s winged chariot” is at the narrators back, suggesting that if they do not submit to love and sexual desire before it’s too late they will be left in a marble grave where “none do there embrace.”

The poem is based on the age-old Carpe Diem theme which deals with the issue of brevity of life. This theme although being a very hackneyed one has been developed in a way that catches our attention because of the poet’s fresh take on the concept of defeating time with the help of human passion. This novelty of thought is another aspect of the poem’s meta-physicality.

The defiance is not in the fact that the functional property of time has been retarded, but in the fact, which is more insulting to time’s capacity. The lovers will make the sun run with more speed, but the passage of days achieved by this will not have its effect on the permanence, which the prudent lovers will have in their possession.

Popular posts from this blog

March 22, 2017
The Fakeer of Jungheera is a long poem by Henry Louis Vivian Derozio. He was poet, novelist and writer. Most of the work in found to Indian religious, culture, rule and regulation, rigidity, culture etc. His writing in see to voice of against to society. Something should be real and has society represented of cruel way. In this long poem,  “The Fakeer of Jungheera” in protagonist of the Fakeer poem is a robber Fakeer or a mendicant,  who belongs to some unidentified Muslim sect, while the heroine  the widow Nuleeni,  comes from an upper cast Bengali Hindu family. The Fakeer of Jungheera' Deroiz mixed the tantric, Hindu, Mythological, Islamic and Cristian tradition. He got the idea about writing the poem of spiritual love from Baital Pachisi. As the story goes, if King Vikram remains stead fast  in his love for his queen he can resurrect her and once more both can find happiness together. The dauntl
Post a Comment
Read more

"The Swamp Dwellers" by Wole Soyinka

March 25, 2017
"The Swamp Dwellers" is a play that focuses on the lives of the people of southern Nigeria in the 1950s. It portrays the struggle between rural and urban life in the country and also focuses on the struggle between human beings and nature. The Swamp Dwellers by Wole Soyinka is placed in a backward village of Nigeria in the Delta region. But the characters of the play often have important interactions with the town life. Typical to the people of a poverty ridden village, the town is a place of money, and luxury to the Swamp dwellers. To the older generation of the swamp dwellers however, the town is the symbol of corruption. Here the attitudes to the city life are mainly expressed by Alu, Makuri, Igwezu, and Kadiye. The older generations’ views to the city are expressed through Alu and Makuri. Alu and Makuri have two sons- Awuhike and Igwezu. Both of their sons went to the city for better prospects. But Awuchik
Post a Comment
Read more